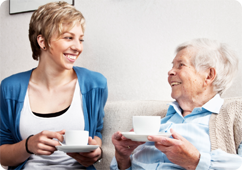 Alzheimer's is a type of dementia that causes problems with memory, thinking and behavior. Symptoms usually develop slowly and get worse over time. In time, they hinder daily tasks.

Learn more about Alzheimer's disease and other types of dementia

Alzheimer's worsens over time. Memory loss is mild in the early stages. In the late stage, individuals cannot carry on a conversation or respond. Alzheimer's is the sixth-leading cause of death in the United States. Those with Alzheimer's live an average of eight years after symptoms begin. Survival can range from four to 20 years.

Learn about the 10 signs of Alzheimer’s

Alzheimer's has no current cure. But treatments can help, and research continues. Current Alzheimer's treatments cannot stop the disease from getting worse. But they can slow dementia’s symptoms for a while and improve quality of life for both those with Alzheimer's and their caregivers. Researchers around the world are now seeking better ways to treat the disease, delay its onset and prevent it.

The Alzheimer’s Association Oregon Chapter educates and supports people when they are diagnosed. It also supports their families and caregivers. The Oregon Chapter has offices in Portland, Bend, Medford and Eugene. The chapter provides: Information and resources; A 24/7 telephone help line; Local support groups and education; An annual caregiver conference; A nationwide identification program, MedicAlert + Safe Return, for people who may wander and get lost.

Part of the Oregon Brain Institute at Oregon Health & Science University, this is a research, clinical care and education center for people with Alzheimer’s disease or another dementia. It is one of 31 National Institutes of Health (NIH) Alzheimer’s disease centers, and the only one in Oregon. Layton Center clinicians provide diagnosis and care, and the Center regularly recruits volunteers, including caregivers, interested in participating in research studies and clinical trials.

Connect with your local ADRC.

ADRC of Oregon staff are available to help you explore your options to meet your current needs or create a plan for the future.

Oregon guide for family caregivers, providing information and resources for each stage.

A helpful guide from the National Institute on Aging.

A list of the ten warning signs, and the rights of people with dementia.

After a Dementia Diagnosis: What Next?

List of important considerations and next steps for people with a dementia diagnosis.

A free government source of information about Alzheimer's disease and related dementias.